You are here: Home / Blog / Something Fun 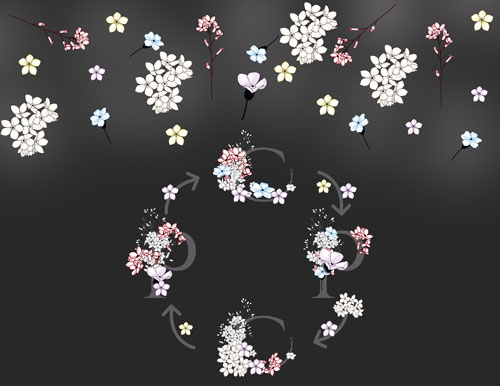 Here is a tiny peak into my brain. Lucky you! As a visual learner, I tend to visualize what I am mentally processing. I am currently a full-time student to get the BA documentation of the knowledge and skills I use on a daily basis. One of this week’s discussion challenges hit on a “soapbox topic” for me. Consumption and production of media. I am not going to get on the soapbox – I’m just going to try to explain how I visualize this tiny bit of information.

This assignment came in a week of getting to play with a lot of flowers while working on a wedding invitation. I absolutely love flowers – almost as much as I love learning. My homework assignment was to create a graphic of my understanding of the relationship between consumption and production.

I tend to visualize media as lots of pieces of paper:

However, rather than creating a graphic to represent pieces of paper or icons of media, I used flowers. The variety of flowers in an array of colors are representative of the wide variety of media in the web – articles, documents, photographs, podcasts, and videos in any number of topics a person can think of. The “C” stands for those who consume media and the “P” is for those who produce media.

This is a never-ending cycle. One would have to live on a remote island in order to get away from digital overwhelm; even then, if you have a smart phone and cell signal, there will be the capability of finding information on the world wide web. Since the majority of people don’t go to this extreme, I believe it is safe to say everyone has been inundated with media consumption at some point.

I also believe we don’t have original thought,

making it so we always start as a consumer. But, even as a consumer, there is only so much information you can hold before you have to hand some to another, or share it – which is producing.

Each time our role changes the information will look a bit different based on our own personal experiences and life beliefs.

Even though the topic may not change, because everyone understands things a bit differently, the way we share something as a producer the information will make sense to one person and not as much to another. This keeps us constantly going back and forth from the role of consumer to producer. I think of consuming & producing media being like throwing a bunch of flowers into the air and a group of people gathering them up – even though the flower varieties and colors are the same, no two bouquets could or would be the same. Each bouquet (consumed, created, or produced) is arranged a bit differently because each person gathering is different, and the information (flowers) being gathered up are a bit different, and the timing of “grabbing” the information (flowers) is different.

When we consume media by reading, watching, or listening we are in the role of media consumer; however, as soon as we share the information, we become a producer. We might only initially reflect on information, but as we think about it, we will put our own twist on the information – again, making us a producer.