You are here: Home / Portfolio / Stickers

Blue Ice Aviation is a small air taxi in Alaska, the owner is an Alaskan Bush Pilot. As a bush pilot, Matt seldom lands on paved runways, which means there is always a lot of potential for things to not go as planned. He often makes quick, last-minute decisions based on inconsistent weather or changes to the proposed landing area, such as: moose or caribou in the clearing, a bear in the area, or it may be as simple as when he gets closer to the ground realizing the rocks are bigger than originally thought. A common statement of his before take off is a tongue-in-cheek statement, “What could possibly go wrong.”

The goal of this 2″x6″ sticker was to be used as a bumper sticker, but also small enough to be used on a water bottle, laptop, iPad, etc. Basically, it needed to be smaller than a typical bumper sticker to appeal to those who simply like stickers and those who don’t put stickers on their vehicles or are too young for a vehicle. 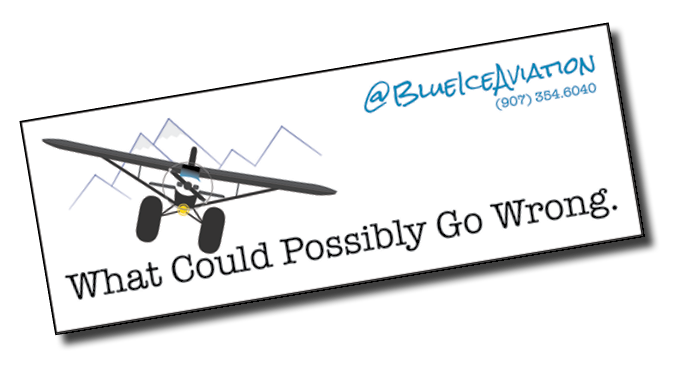